Rain… HALLELUJAH!  We heard it was coming and rejoiced… but the entire week before, I made them play outside a lot.  We even bought bubbles!  Now we have the pictures to give us a little sunshine on this rainy day. 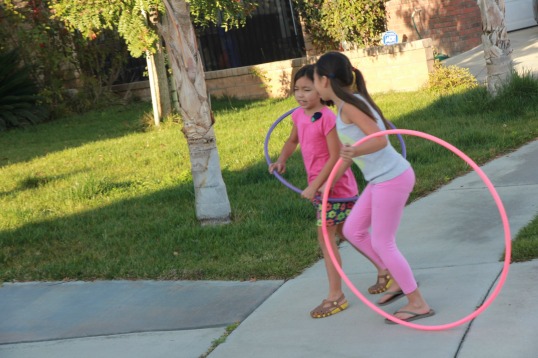 From the time my kids were little, our visits to the park never seemed “traditional.”  What I mean is, my kids never seemed to just want to run around and play.  In fact, my oldest at age 2 would ask to sit and “talk.”  (That has not changed.)  Granted, we all love the park.  We find different ways to be creative and have fun.  But, it’s rarely kids run off and mom relaxes on a bench.  (And that’s ok with me, too… mostly!)  Anyway, after this particular park trip, the kids came home with pinecones to paint. 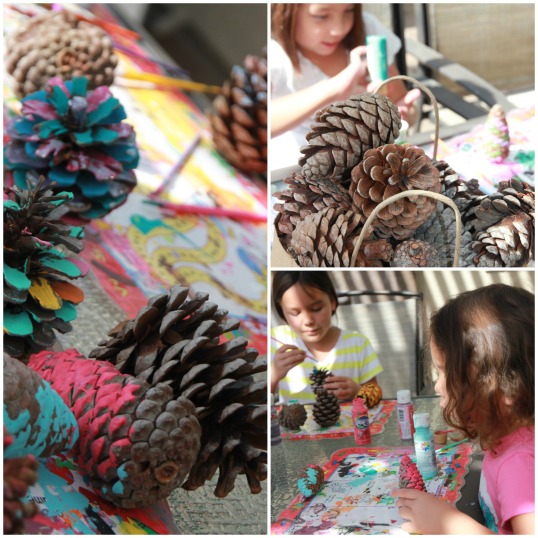 Miss Natalie still loves writing and illustrating stories.  But, they are always top secret for weeks until she is done.  I often walk by her desk (curtain closed) and pull the curtain back and say “boo” to tease her.  This particular day, she got me — I was walking by when suddenly, “BOO!”  I jumped, and we both had a great laugh!

I don’t know how many of these paper “dolls” I have made.  I estimate close to a hundred, and that’s not exaggerating.  It is still a favorite pastime for my girls.  I smile when I think it may be a fond childhood memory that they will cherish and perhaps a tradition they will pass on to their own girls.  Basically, it goes like this:  (Forgive me if you’ve read this before!)  I cut a paper into thirds.  I tai my black pen and draw as the girls describe their doll in detail.  They then name the rolland color it in with watercolors.  This is only the beginning.  After that, it is hours of play.  Love.  this.  tradition. 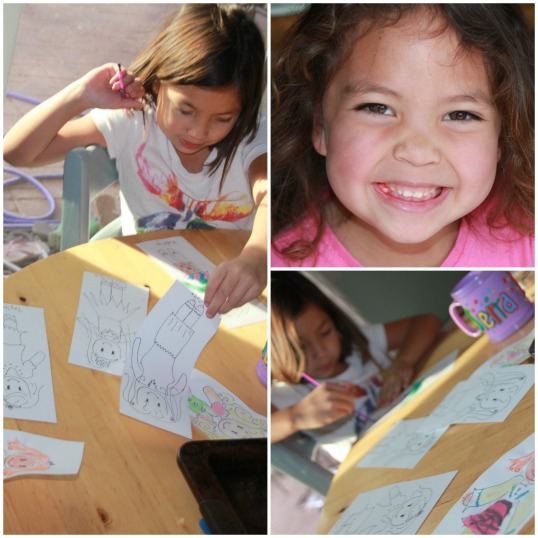 It would have been so much easier to do by himself… 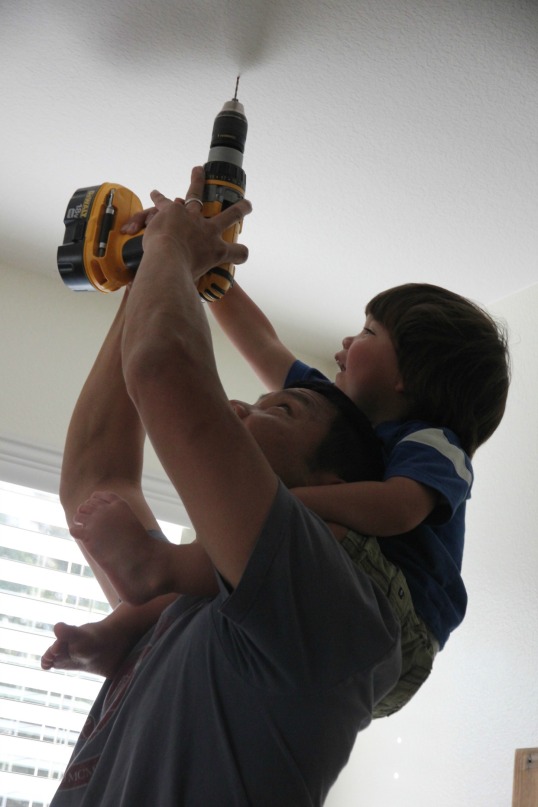 But that’s not how my husband thinks.  In fact, Malachi was not even asking to help.  Daniel called him over.  He purposefully enlisted his help!

And, Malachi was thrilled.  This is not even new to having boys.  From the time our girls were little, Daniel has enlisted their help in home projects.

I love the teaching that takes place.  And the bonding.  And the sense of accomplishment, pride, and confidence he’s building in our children.  And, of course, the cute pictures to go with it! 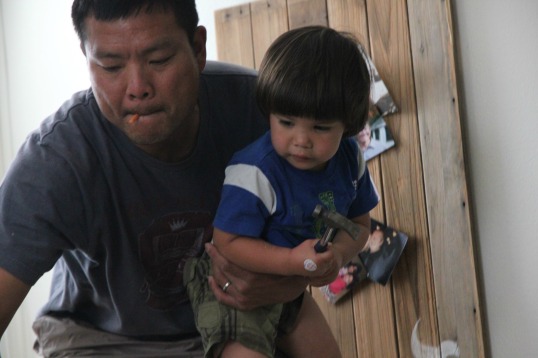 No, he didn’t have to ask for help.  Yes, it would have been easier to do it alone. 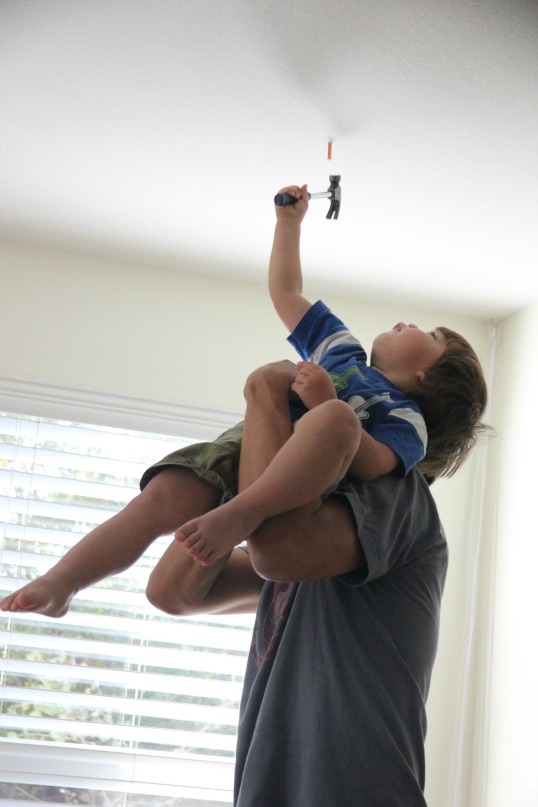 But I’m so glad he chose not to!  Oh, and take a look at our cute little lights I found on clearance at Target: 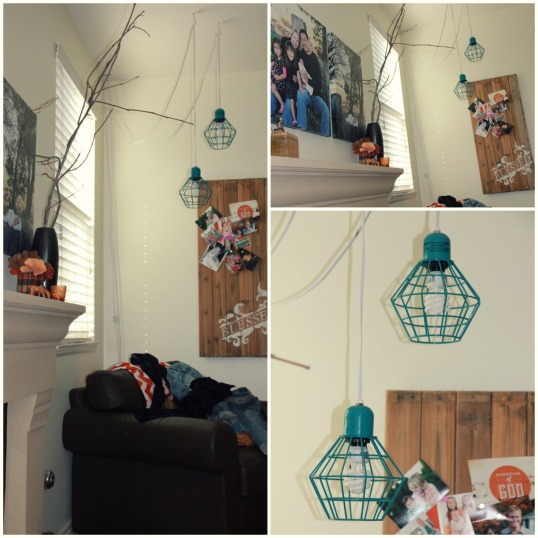 It happens every time…

Whenever we are all in a room together, one of the kids always yells out, “FAMILY TIME!”  Suddenly Malachi’s arms are lifted and he requests, “Dance with me.”  Or a little curly top is crawling onto my shoulders.  Or kids are singing, “Daddy be a horseeee.” Frankly, chaos ensues.  But there is a lot of laughter.  And a lot of smiles.  And a lot of joy and relationship happening.

I rarely grab my camera.  I don’t want to interrupt the moment.  After all, that is what it’s all about!  But this time I did… just to capture it, and remember it, and hold onto it.  I love that it still happens and pray it never stops — even if the horseeee can no longer crawl due to the weight!

Lately, I’ve had so many projects inside my head that I want to do around the house that I don’t know where to begin!  It seems by the time I put the kids to bed and clean up the house, I am just zonked.  So, even though most of the projects are fairly simple and fun, I just don’t have the energy.  (Not-to-mention, I am loving reading THIS book my husband got me for my birthday every “free” minute I get!)  But, I finally worked up a little energy last weekend and did something I’ve been thinking about for a while but haven’t gotten to… painting numbers on my bar stools.  (I also got my free birthday drink from Starbucks before it expires… I hardly ever go there, but I certainly can’t pass up free and I think the caffeine helped!)

I used the trick I learned from JDC, which is to print up what you want, color chalk on the back of your printed paper, and then trace it onto your surface.  Best.  Trick.  Ever.

I then traced the chalk likes with a sharpie.  I intended to paint the inside, but decided just to color it all in with the Sharpie, as well.  (I’m hoping that was the right decision and that they won’t wear off or smudge!)  But, I love how they turned out: 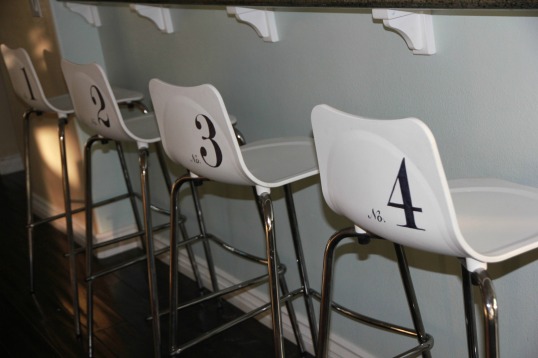 Daniel gave the kids a school lesson on Chinese New Year and let them do “fireworks,” make their own red envelopes, and learn about the moon phases.  (I can’t even remember where I was, but I am so thankful I can take a day off sometimes and my husband steps in!) 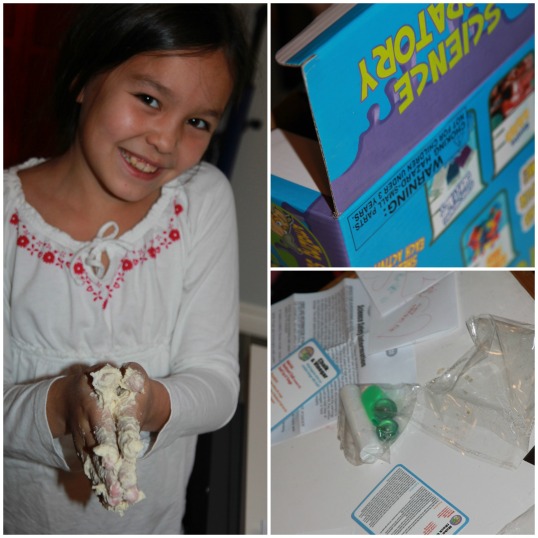 One day for science I just let Allison have her science kit and told her to try a few things on her own.  She did a great job, only her homemade glue got a bit messy!

We are still loving Little Passports.  Their last envelope was from Egypt. and they were given tools and pyramid with a treasure inside.  It took them hours to finally uncover their treasure, but they loved it.  Such a cool package!

So, I haven’t done a recipe post in a while.  The truth is, I haven’t really been good at menu planning, lately, so I have nothing too exciting to share.  I was really hoping this recipe would be a huge hit, but they turned out super bland.  However, I am not quite ready to throw in the towel just yet.  (Mostly because they smelled amazing while cooking!)  I am going to try them again, only adding some garlic salt and perhaps a little olive oil.  Any other ideas?? 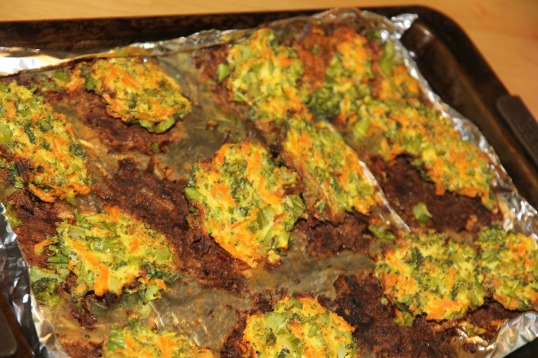 1. Preheat oven 400 F.
2. Combine all ingredients together and mix well.
3. Line your baking sheet with aluminum foil.
4. Place 1 full tbsp. of the broccoli batter on
sheet pan for each crisp.
5. Bake 20 minutes on one side, flip and bake
about 10 minutes on other until golden brown
and crispy.
6. Sprinkle with additional Parmesan cheese
before serving. 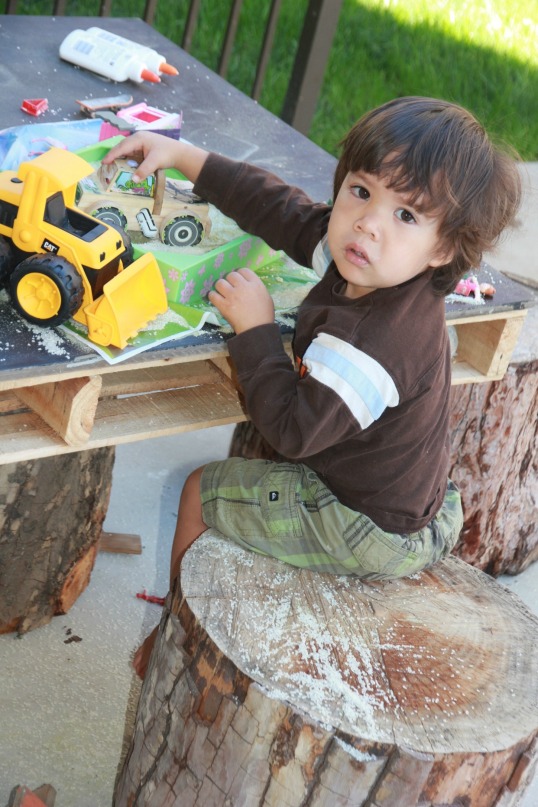 What do you mean I’m not suppose to play monster trucks in my sister’s fairy sandbox??  I’m quite certain that’s what the green sand is for!

I don’t really consider myself a spontaneous kind of girl.  For the most part, I like things planned well in advance.  However, whenever we do something spontaneous, I always seem to enjoy it even more; spontaneous lunch dates with friends, spontaneous trips to the park… and spontaneous hikes!

We were driving home from gymnastics on Thursday morning when I made the comment, “It’s a beautiful day.  We should go for a hike or something.”  (not really thinking we would, of course, because that would be way too spontaneous.  After all, I had to make lunch, do school, and put little M down for a nap!)  “Ok,” my husband responds.  And, there you have it!  As soon as we got home, I made some sandwiches, cut up some apples, filled some water bottles, got the dog and his leash, and we were off! 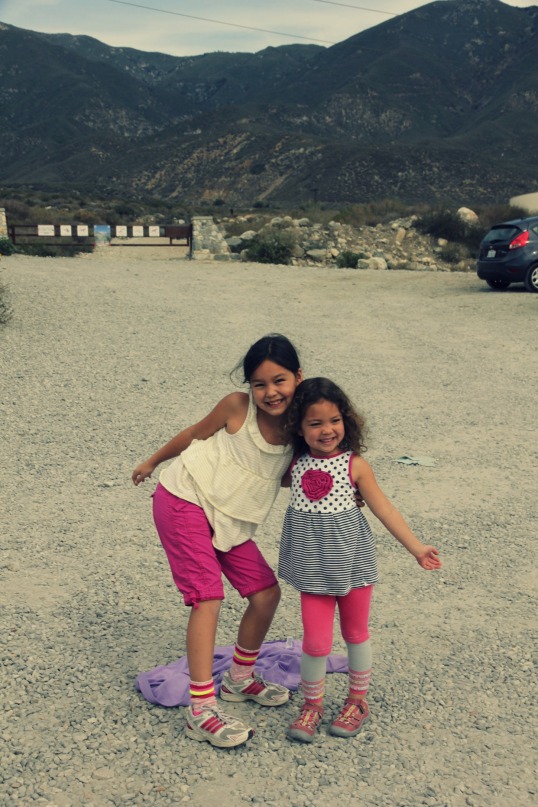 I took these 2 pictures as soon as we got out of the car.  (The hiking trail head is only 1 mile from our house!)  I really wanted more pictures of the hike, but decided it would be too much to lug around my big camera.  It turned out to be a good decision, as I had Malachi or Sierra in our hiking backpack most of the time.  The good news is, we had a super fun time and made it to the waterfall just in time for lunch.  Our sweet dog loves hopping through the creek while we eat.  Malachi and Allison also enjoyed a little creek walk.  I used ice cream as a motivation for everyone to hike back down, and Malachi took a little snoozer in the backpack.  Natalie got a science lesson on how and why blisters are formed from her daddy.  Such great memories!  If only I would learn to be spontaneous more often…

What a weekend… phew!  It felt like a whirlwind!  Friday, (Valentine’s Day), was awesome.  Saturday and Sunday were FULL, and the kids were zonked.  I think I’ve handled more 4-year-old tantrums in the last 2 days than ever before, but somehow God’s peace has kept me from “feeling it” as much as I normally would.  I’m actually thankful for the reminder that this is real life and I need God more than I could ever know.  Even as I type this, that Matt Maher song keeps coming to mind; “Lord I NEED you, oh I NEED you!  Every hour I need you!  My one defense.  My righteousness.  Oh God, how I need you!”

But back to Valentine’s Day… it started with the girls opening they bags.  It was especially fun since they had friend Valentine’s from a little Valentine party that they saved until this day.  Of course, they each got a special card from daddy that I have now filed away with the others they’ve received since birth. 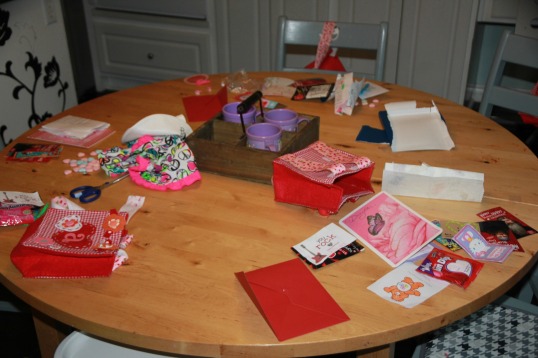 Breakfast:  eggs, bacon, and heart and star waffles.  I actually opted to have my bacon dipped in pancake batter as I have wanted to try that since seeing it on Pinterest.  (It was good, but I prefer my bacon mixed with eggs instead, I’ve decided.) 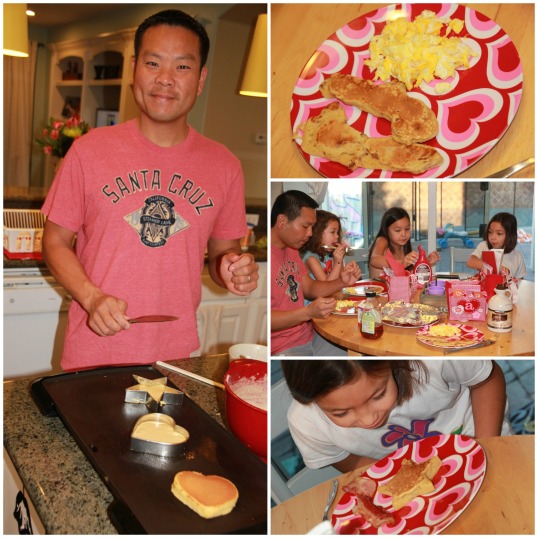 Next we kidnapped or favorite teenagers, (whose parents happen to be some of our favorite friends), and headed to San Diego for the day.

Despite it being a beautiful blue sky day, just over the beach was a thick fog.  It was actually very cool.

A real sand dollar is actually purple when it is alive.  Who knew?  It made a great (and very smelly) addition to our girls’ shell collection!

How do you like the heart puddle?  This boy LOVED it! 🙂

Random surfer.  The fog made him look extra cool. 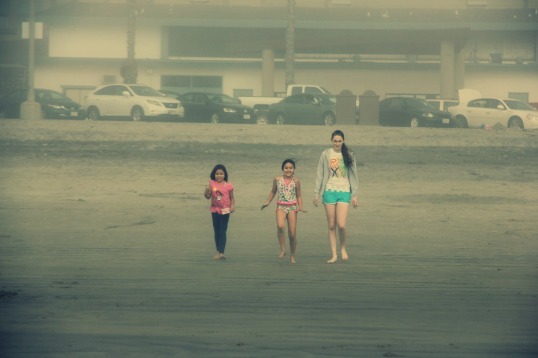 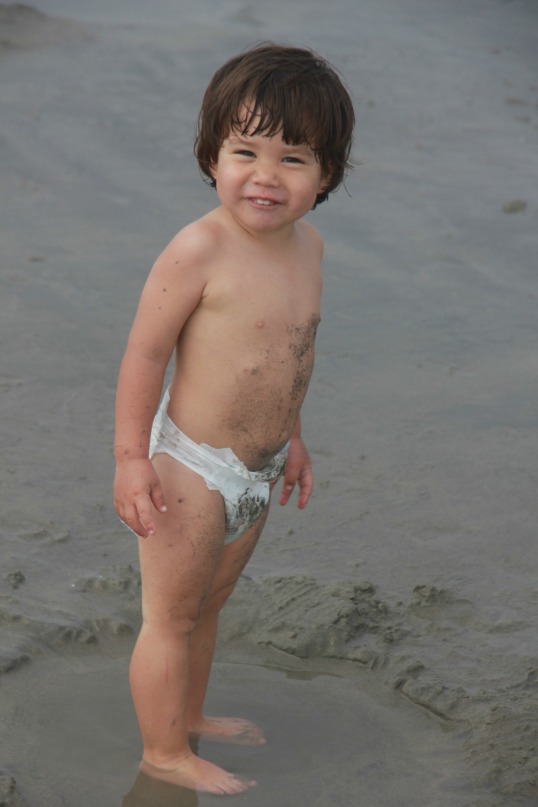 So, the real reason we went to San Diego and brought along our favorite teenagers was so we could go to a marriage conference in the evening. 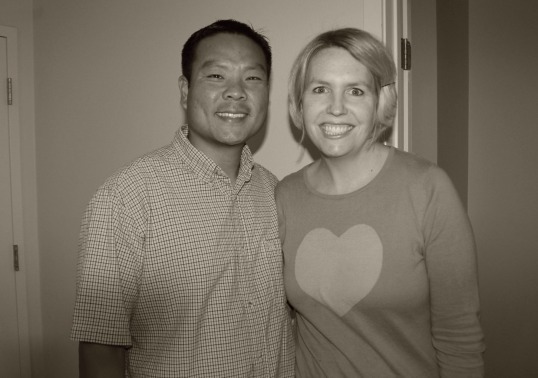 And, not just any conference… But one led by none other than my childhood crush, Kirk Cameron.  I’m still kicking myself, a little.  I probably could have met him if I was pushy.  But, I didn’t want to be.  I did get to talk to his mom, though.  She was very kind and gracious.  It was so fun to be there with my husband on Valentine’s day.  I’m so grateful he planned it! 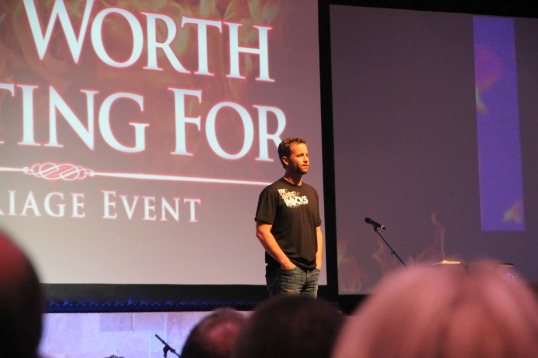 I’ll spare you the video of me singing the Growing Pains theme song at the top of my lungs as it was being played.  Happy Monday, my friends!